Last week I explained all the different terms that are used in weaving drafts.

Today I will show you how all the fancy words come together so you can read and translate a standard weaving draft.

Disclaimer: A standard reading draft to me is translated for a jack-type loom where the shed is created by lifting the harnesses.

A color and weave pattern means that a pattern is created by the intersection of the stripes of different colors. And they are defined by the type of weave structure used to create it. This is a balanced twill with 6 thread stripes in both the warp and weft.

Think of a weaving draft like a graph. Each square in the threading intersects with the treadling. And the treadling is dictated by the tie-up.

So, beginning from left to right:

So as you throw your shuttle through the warp, the shuttle will slide over the resting threads that are on harnesses two and three and will go under the threads lifted on harnesses one and four.

Looking at the very first thread in the draft above you will see that the warp thread is going over the first weft thread laid.

As you look across the draft you will see that any warp thread that is marked in the threading as being on harnesses two or three, the weft thread has passed over these threads.

Let us continue through the pattern to see how each section progresses. 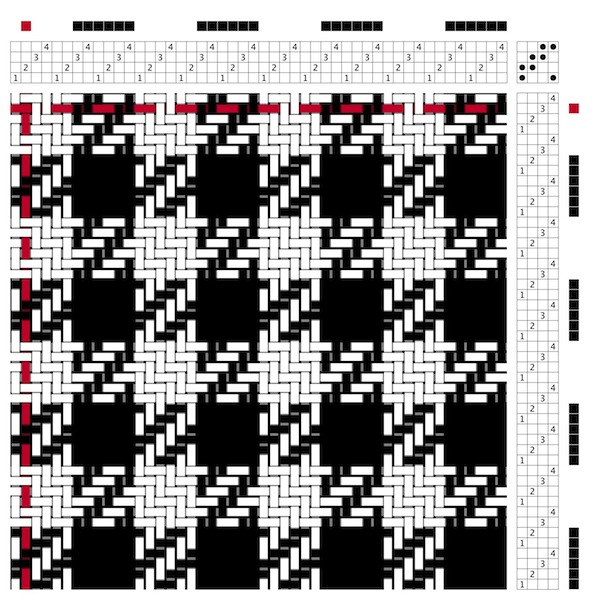 The pattern that develops from this progression is called a balanced 2/2 twill.

It is balanced because the warp threads are also going over and under two consecutive weft threads.

4 thoughts on “How to Read a Weaving Draft”