One day during the summer of 2015, Eric and I ventured to an Antique Fair / Flea Market to just look around and see what we could discover. I was on the hunt for either antique tools or antique coverlets. We ventured around, and each time we discovered a new coverlet I would investigate it. It seemed that how people were pricing were based on the size of the blanket- not necessarily the quality of the piece.

As we were walking through the final barn I saw a hot pink coverlet hanging off of the back of a display. The woman said it was from the 70’s which initially I thought meant the 1970’s and realized I was mistaken. I was taken aback by the hot pink color. And when I mean hot pink- it is the color Barbie would have chosen in the 1870’s to have her coverlet woven with. There were very minimal holes, and the pattern weft was beautifully intact. And it was a very decent price. I can’t remember what it was at the time of this post, but I also purchased a small sample piece from her. 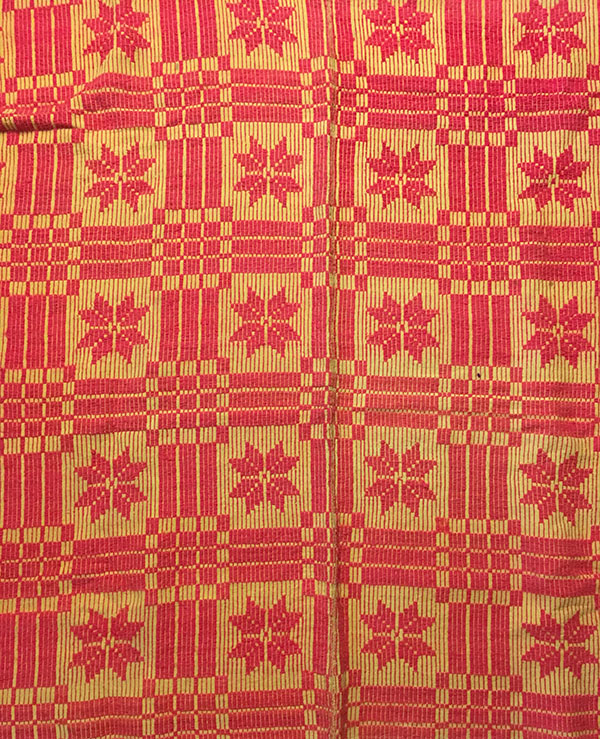 From what I have been able to see from this weaving is that the panels are sewn together, and that the materials are wool and cotton. This was not an easy pattern to decipher at first glance. The motifs are an 8 pointed star that is enclosed in a monks belt style frame. Throughout the entirety of the piece however there are ribs. Without the ribs, this would look like a type of double weave- but the ribs threw me off.

by Helene Bress, I was able to narrow down the patterning and how the structure actually works. The descriptive title of this structure that Helene Bress and Madelyn van der Hoogt came up with was “Tied Float Weave”. This is because the floats are tied down in regular equally sized ribs throughout the whole fabric. The floats, as thy are woven, will stagger like a brick wall. According to this book, it is similar to a Summer and Winter structure- where the tie down threads alternate between harnesses 1 and 2, and the pattern threads are group in between the tie downs.

I personally- do not understand this structure. So, I will revisit this to see if I can recreate something similar to explain in more detail. In the mean time, I am going to closely examine this coverlet to see if I could translate it into a physical draft for us all to look at- and admire the complexity of this woven structure. 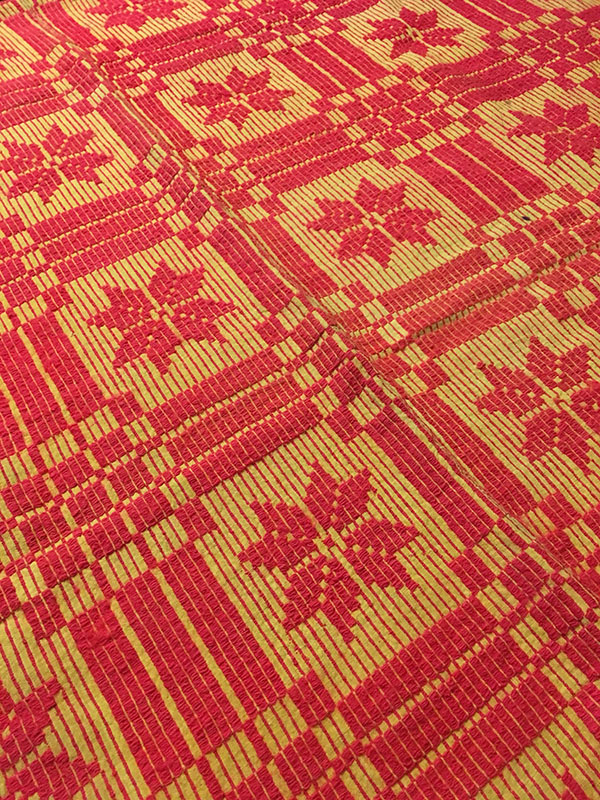 As I was looking back and forth from the pictures to my books, the color kept popping out at me as if were teasing me. How could this bright and bold pink occur? Especially in the time frame that we are looking at?

From what I have found- to get that degree of pink would have had to come from a synthetic dye. The only reason I say this is because, in order to get that kind of color from natural dyes in the late 19th century there would have to be a combination of brazilwood and a variety of mordants. I find this very unlikely because natural dyes over time would soften in intensity- and here it looks as bright as the day it was woven. This may place this coverlet into the earlier 20th century. I don’t whole heartedly trust the woman who I purchased this coverlet from to give me an accurate date, but- she gave me a good time frame to lean towards to investigate the dye stuffs that could have possibly been used to create such a shocking color.

As you can see in the images, the pink from the wool has bled into the natural color of the cotton, creating a slight halo. This could possibly be attributed to the newness of the synthetic dyes and the trial and error of color fastness. Regardless of the halo- this coverlet is in really great condition. There are some holes, but it has been well taken care of.

So this is my message out to the textile universe: am I totally off with my assumptions about the type of dye and time period of this coverlet? Has anyone else seen such a bright pink color in an antique coverlet that wasn’t the result of the red fading out from the wool? I am interested to hear your thoughts.

A strong win for option 2 on yesterdays poll with

There is a little breathing room to work on this s

What happens when you get into the groove but forg

A little sneak peek of a new towel pattern we will

Slinging our wears at @sovtarts this weekend! Open

Rocking and rolling on some orders this afternoon.