I was absent for a few days because of a few reasons: I was taking an early holiday vacation and I was doing some weaving on two looms at the same time- and time just got away from me. So I am back! And I wanted to show you some pictures of the current weavings in progress and a my thoughts on them.

So a couple of weeks ago I stayed up very late and decided to create warp, without really planning. Just winding it unto to the warping board as I see fit. I wound on about 36 yards of warp (three different warp chains) in two late evenings. And what I learned is that not all late night decisions are good ones, but they could be fixed.

A flub that turned into something that I am actually proud of is a yarn stash busting warp, which consists of an old cone of woolen white yarn that I had acquired, a cone of dark grey wool that was a mill end, and a merino/tencel blend in a rich dark turquoise color. I had gone off of a draft that I found in a book to create a felted scarf with long warp and weft floats. Now- had I been thinking clearly, I would have realized that irregular stripes do not really create a visually appealing scarf for long symmetrical floats:

I tried a few other computer generated ideas of how I could remedy this situation since the warp was already on the loom:

I ended up making my final decision while I was sitting at the loom, using a wool and silk blend yarn as the weft and I used a simple twill that reverses direction every 12th pick.

And on the other loom I have a weaving that didn’t nearly give me as much as a headache. It is a simple check using red and purple bamboo yarn, with an accent of space dyed tencel to add visual texture. 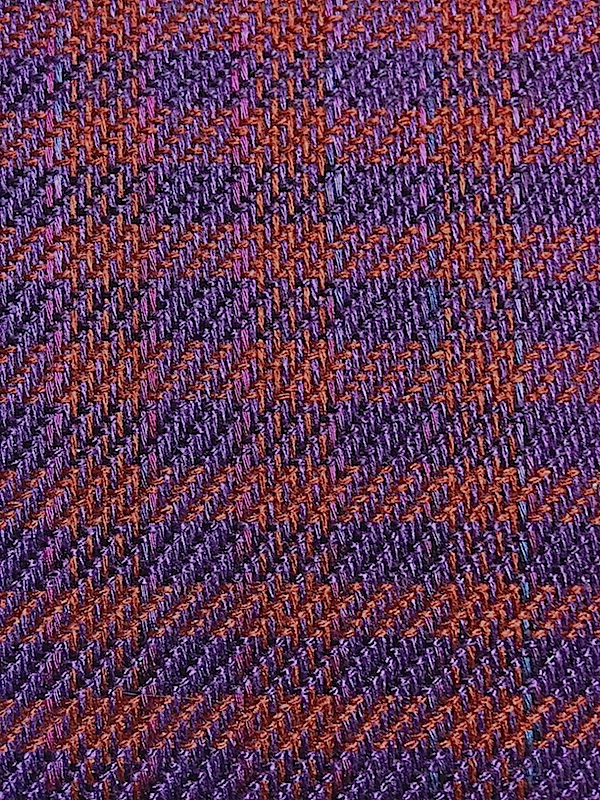 After that last set of scarves with the incredibly complicated 12 harness pattern, I decided that it would be best to do some very simple twill scarves to get back into the rhythm of weaving without trauma.

I am enjoying the process of just weaving without getting frustrated (which was happening with Echoes, I was very happy to get those off the loom). Now that I am back into the swing of things, blog posts will resume their Monday, Wednesday and Friday schedule and I will keep you updated on cool books to read about weaving, some lessons about the whole weaving process and updates on my own work! Thank you for being patient.